Actions against GMO in United Kingdom 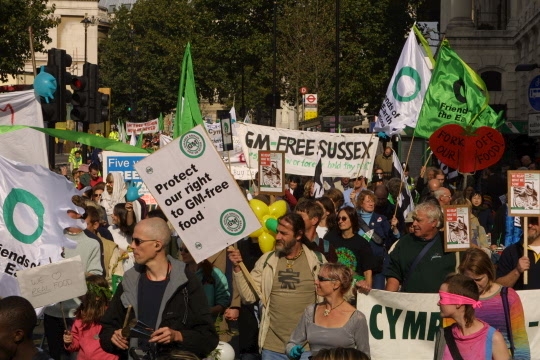 GM tomato paste was the first product sold in the UK, but this was soon withdrawn. Protests against Monsanto’s GM RoundUp Ready soy imports began in 1996, including some high profile direct actions against shipments. Consumer actions included voluntary labelling of supermarket products with stickers, and handing out leaflets outside stores. In 1998, Iceland became the first UK supermarket to ban GM ingredients from own brand products. UK field trials of GM oilseed rape and maize attracted opposition from local people, neighbouring farmers and activists. The UK Government announced a voluntary agreement with industry not to grow GM crops commercially until a series of ’farm-scale trials’ were carried out to look at biodiversity. In 1999, major UK supermarkets and food manufacturers began removing GM food ingredients and the promised farm scale trials began. In 2002, the Government announced it would hold a public consultation exercise on GM crops, and produce reports on the science and economics. In 2003, this « GM Nation ? » consultation revealed widespread public concern. In 2004, the results of the farm scale evaluations were published, showing harm to wildlife (due to changed herbicide use) for two herbicide-tolerant GM crops (oilseed rape and sugar beet). The GM maize was compared only with a conventional crop sprayed with a harmful weedkiller, atrazine, that was later banned. Although the UK government approved this GM maize for commercial growing, the company withdrew the application. Due to public opposition, no GM crop has ever been grown commercially in the UK and products containing labelled GM ingredients rarely appear on supermarket shelves. However, GM RoundUp Ready soya continues to be imported for use in animal feed, as GM-fed meat and dairy products remain unlabelled. By 2017, Scotland, Wales and Northern Ireland had all opted out of growing GM crops commercially : however, the UK Government continues to work closely with industry to promote GM.