Alteration of the living : new techniques explained to the layman

Inf’OGM has published in october 2011 a report (in french) on the new techniques of biotechnology [1]. In summer 2012, Inf’OGM decided to provide the european citizens with an english version of this report. You can donwload this report on this page :

Plant genetic engineering with laboratories’ techniques is a process still going on in the biotech companies’ laboratories. The current commercialised GMOs come from a technique already obsolete. For transgenesis is no longer the only technique adopted by the industries to genetically modify plants. The technicians have now the choice between several techniques with names such as zinc finger nuclease technology, cisgenesis... Focusing on the risks associated with transgenesis, which allows the genetic chimera development, public debate got recently interested in older genetic engineering technique like mutagenesis. This debate on mutated plants did not occur prior to their commercialisation which happened with no legal biosafety framework. New techniques that are now coming out from laboratories require public attention. By the end of 2008, European commission requested from member states two experts to join a european working group. Its goal was to answer the following question : does GMO legislation applies to products obtained through the use of those eight techniques ? In June 2011, the experts had not finished their work and no calendar was known by then. To answer this new move of technoscience, a seminar was organised by Inf’OGM in order to start thinking an independent and critical analysis. With the purpose of having a democratic debate with sufficient knowledge.

General considerations in relation to the appropriation of living organisms

The principles of synthetic biology

An analysis of genetically-modified organisms for social change

General considerations in relation to epistemological and ethical issues 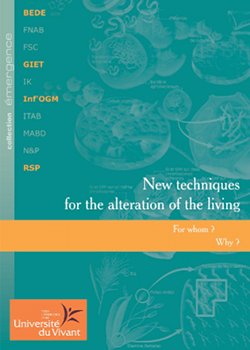