The Forest Stewardship Council (FSC) is one of the world’s largest certifiers of ’sustainably harvested timber’. Since 1995, it has banned genetically modified trees, which limits de facto their development and marketing. Indeed, this label covers very large areas of forest and involves the main companies in the timber industry. However, the FSC has been trying for some years, under pressure from paper companies, to limit this ban. Recently, it proposed a new definition of GMOs that excludes those resulting from new genetic modification techniques. The FSC General Assembly in 2025 will be decisive in confirming this proposal or not. 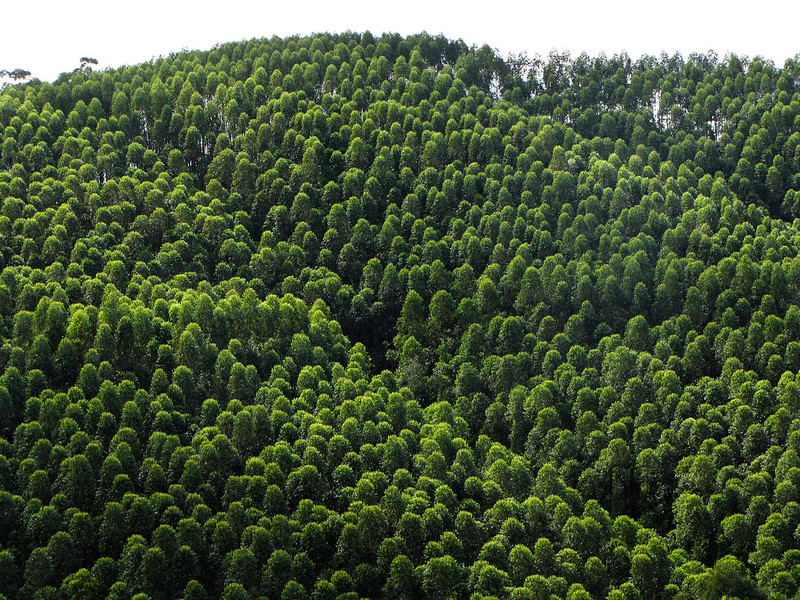 The Forest Stewardship Council (FSC) has been opposed to genetically modified trees for more than two decades. However, from the outset, the label has left open the possibility of adapting or even restricting the ban. Thus, in June 1999, « the [FSC] General Assembly reaffirms its support for the current ban on the use of GMOs by certified forest operations but, recognising the increasing intensity and complexity of the debate, mandates the Board of Directors to a) clarify the existing definition of GMOs and b) complete the drafting of the FSC GMO policy » [1].

Historically, no crops but some trials of GM trees

A few months later, in 2000, the FSC interpretation of the definition of a GMO was published [2]. This non-binding document recalls the ban on GMOs... Inspired by the European directive 90/220, it takes up the definition and exclusions but mixes the two types of exemptions provided for by the directive. The FSC refers only to « techniques (...) [which] are not considered to result in genetic modification » (Annex IA), namely :

conjugation, transduction, transformation or any other natural process,

cell fusion (including protoplast fusion) of plant cells where the resulting organisms can also be produced by traditional breeding methods". However, Directive 90/220 considers mutagenesis and cell fusion to be techniques of genetic modification but excludes them from its scope (Annex IB). The difference is significant. The document goes on to state that « certification bodies will impose preconditions or conditions on applicants for certification, where applicant forest management units use or contain GMOs in their management, production or research programmes. They will impose similar corrective action requirements on certified forest management units that use GMOs ». The document, which balances the two, states that GM trees have great potential and risks and that « many of the potential negative effects may result from field research, even research designed to test for such effects ». It therefore proposes that « GMO research cannot be included in certified forests », even though « guarantees and restrictions on such research, to enable confident prediction, assessment and avoidance of risks, are not yet formulated or agreed ». The document therefore recommends that because of « the difficulties of avoiding the spread of transgenes » "such research should be conducted in the laboratory or in extreme isolation". Furthermore, the same document argues that « FSC guidelines, strictly interpreted, do not preclude GMO research as such, but only FSC approval of forests containing such research ». The document concludes by pointing out that « some stakeholders have suggested that FSC should allow greater flexibility towards certain genetic modifications under research, which may offer environmental, social or economic benefits, without risk to FSC objectives ».

With whom can the CSP associate ?

The FSC does not certify companies but forests. However, the FSC has gradually sought to clarify which companies it wishes to work with. This has led FSC to produce a document entitled ’policy for association’. In July 2009, the FSC Board of Directors, at its 51st meeting, stated that « FSC will only allow association with organizations that are not directly or indirectly involved in the following unacceptable activities : (...) e) Introduction of genetically modified organisms into forest operations » [3] and in 2021 [4]). Beforehand, this company and its subsidiary FuturaGene have been conducting field trials since 2012, in particular with a view to preparing their application for authorisation. The FSC should logically have excluded this company. The FSC wrote in 2015 : « The authorisation to commercially deploy the GMO clone does not put Suzano in conflict with the FSC rules as long as it does not use it. However, if Suzano proceeds to plant GMO trees commercially, FSC would initiate a formal process under our association policy, leading to a disassociation from the company » [5]. The ’regulatory’ field trials are for commercial purposes. Suzano needs to conduct such trials to support its application for commercial approval. These are not trials conducted by independent scientists, but by the company itself. In other words, it is a necessary step in the commercial authorisation process. In 2021, the FSC is organising a public consultation on proposals for the evolution of its document « policy for association ». This consultation is mobilising social movements, particularly those opposed to GMOs. Thus, the Global Forest Coalition is asking for a massive response. On its website [6], which was supposed to have taken into account the comments from the public consultation. The ambiguity that was raised from the beginning has been removed. This document explicitly allows field trials : « FSC aims to partner with individuals and organisations aligned with FSC’s mission and values and will not allow a partnership if the individual, organisation or its business group is or has been engaged in the following unacceptable activities : (...) - Introduction or use of genetically modified trees for purposes other than research (which may include field trials), e.g. for commercial purposes ».

In 2022, FSC also published a paper on « a learning process » in relation to GMOs [7] « FSC intends to use this knowledge to determine whether it can develop a governance model that ensures rigorous safeguarding, risk management and shared value creation for genetic engineering in forestry in non-FSC certified areas. The knowledge gained will also be used to update existing policies and enable informed decision-making for FSC and its members on issues related to future developments in genetic engineering in forestry ». In other words, the FSC wants to develop its own « governance model » of « guarantees » that it will require companies to follow when conducting field trials of GMO trees. However, if the FSC oversees GM tree field trials, it will be involved in any direct or indirect negative environmental impacts of these field trials, as well as any social, economic and cultural impacts. This can undermine its neutrality and independence. More concretely, this FSC ’learning process’ is a first step towards the acceptance of genetically modified trees. FSC claims that the learning process will help it to discuss whether or not FSC should allow member companies to commercially plant GM trees (in non-certified areas). The FSC is therefore very interested in engaging in a dialogue with biotech companies to obtain information from them and then to establish its own specifications. It says that « in phase two of the learning process (multi-year learning project), companies approved to participate will plant trees outside the FSC certified area. This planting would be for learning purposes and this phase of the process would be practical and field-based, under the control and evaluation of the expert panel and annual compliance decisions by the FSC Board, based on the expert panel reports ». The FSC is therefore clearly encouraging the establishment of field trials. Will it also consult with organisations that are reluctant or critical of GMOs or will it limit its learning to companies already involved in field trials ? This learning process mobilises a panel of experts, appointed by the FSC, with a very relative neutrality. Thus Jason A. Delborne works on the social acceptability of GMOs for conservation such as the famous genetically modified chestnut tree, and as such was a member of the IUCN expert panel [8]. In 2021, he was appointed [9] a member of the American Association for the Advancement of Science (AAAS), which is very supportive of biotechnology [10] [11] [12]. Steve H. Strauss « directed the [Oregon State University] Biotechnology Outreach Program between 2004 and 2013, which aimed to promote public understanding and facilitate science-based public discussion of biotechnology » [13] and, in this capacity, he has « helped large companies in the oil and gas, mining and manufacturing sectors prepare their energy transition and circular economy strategies ». In concrete terms, he is actively involved in the social acceptability and greenwashing of polluting industries. Andrew Blackwell, also an expert on this panel, also works for 3sustainibility, and is a consultant for Arcadis, a huge consultancy firm that, among other things, has worked with Syngenta [14]. Finally, Keith Robert Hayes is a researcher at CSIRO in Australia, a relatively biotech-friendly scientific organisation. He has recently studied the spread of sterile male mosquitoes [15]. His work was used by Target Malaria to support their biosafety application and was funded by, among others, the Bill and Melinda Gates Foundation [16] [17]. In the page on this « learning process », the FSC has taken care to differentiate between genetic engineering, « a process that changes the genetic structure of an organism by removing or introducing DNA » and gene editing, « a different process in which genetic material is removed or altered at certain points in the genome of a plant ». It is thus clearly stated that « genetic engineering takes the gene directly from one organism and transmits it to the other. The result of genetic engineering is called a genetically modified organism »... So, for the FSC, gene editing does not result in GMOs. From this « process », as the FSC specifically states, it « will update its policy on the interpretation of GMOs to reflect the current state of research as the policy (developed in 2000) is outdated ». In some 20 years, the FSC has moved from strict opposition to an undisguised openness to field trials which it will « monitor » itself... The « process » and the modification of the GMO policy should be completed by the 2025 FSC General Assembly...

[3] FSC, « Policy for the Association of Organizations with FSC (FSC-POL-01-004 V2-0 EN) », September 2011 (Accessed 5 September 2022)]. A strict reading of this obligation excludes companies involved in field trials of genetically modified trees. This formula will be taken up in 2011 in the second version of its « policy for association ». Suzano, one of the most important paper companies internationally, obtains two commercial authorizations in Brazil for transgenic eucalyptus (in 2015[[<article_authors6665>

[5] https://fsc.org/en/newsfeed/application-of-suzano-for-commercial-use-of-genetically-modified-trees (Accessed on 5 September, disappeared on 13 September). This quote is found in the following article : Lang, C., « Suzano and COP26 : The Glasgow climate debacle, part 3 », January 2022.

[6] Global Forest Coalition, « Tell FSC : Keep GE trees out of our forests ! », November 2021], it points out that « the FSC is trying to dismantle this ban, by first proposing to allow field trials of GM trees. It is crucial to send your comments against the FSC’s authorisation of GM tree research ». It writes that section 4, question f, deals with, among other things, « the change in language to allow GM trees in field trials by FSC-certified companies » and that section 12 deals with definitions, including the definition of a GMO. The Coalition comments on this proposed definitional change as follows : « The FSC is under pressure to relax its definition of genetic modification. Companies around the world are trying to redefine genetic engineering to allow many new GMOs to be put on the market without regulation ». The Coalition proposes to respond that « the definition of genetic modification should include all genetic engineering techniques, including genome editing processes such as CRISPR ». The precise text of the public consultation is no longer online and, despite requests to the FSC, we were unable to obtain this document. The FSC produced a report of this consultation which received 132 responses. The FSC states that "the largest group of respondents was « others ». The relatively high number of respondents in this group is explained by a campaign in which individuals and civil society organisations were invited to respond to the consultation to express their concerns about the use of genetic engineering’. Item 9 of the minutes concerns the ban on GMOs. The FSC working group in charge of evaluating the responses comments on the public comments and, surprisingly, states that field trials are not concerned by the ban. In 2022, the FSC published draft 5 of version 3 of its « policy for association » [[FSC, « FSC Policy for Association (FSC-POL-01-004 V3-0 EN) DRAFT 5-0 », 2022.