Digitalized living in open access ? The WTO enters the dance.

Since the end of 2020, the World Trade Organisation has been debating about a possible legislation on the circulation of electronic data. These talks, which are taking place within the framework of broader negotiations on e-commerce, will have a direct impact on the issue of the living’s digitalization. To understand what is at stake, Inf’OGM has interviewed Chee Yoke Ling* who follows these talks for the Third World Network. 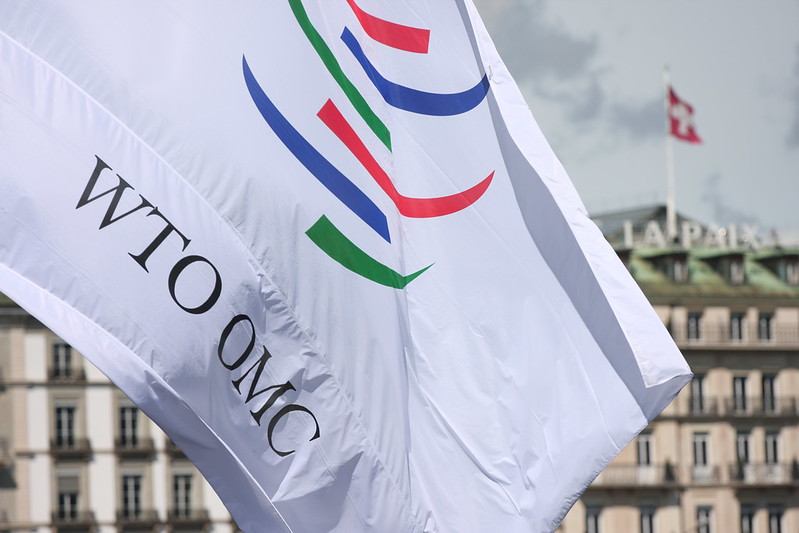 In a recent file [1], Inf’OGM deciphered ongoing negotiations on living’s digitalization. For a few years, some countries works towards suppressing all legal framework over the use of Digital Sequence Information (DSI), the digital transcription of the sequence of molecules like genomes. The consequence of such a deregulation would simply be the legalisation of the looting of biodiversity, today regulated by the Convention on Biological Diversity (CBD) and its Nagoya Protocol. Among the initiatives implemented to this end, one is underway at the World trade Organisation (WTO) which has been negotiating the regulation of e-commerce since 2017. By the end of 2020, observing an increase of e-commerce activities due to Sars-CoV-2 epidemic, Japan, Australia and Singapore submitted a proposal for a consolidated text [2]. This text aims notably at denying States the right to regulate the flaw of electronic data. Inf’OGM interviewed Chee Yoke Ling from Third World Network to decipher what is at stake.

In the World Trade Organisation (WTO), some countries opened an informal debate through a joint statment initiative on e-commerce. This JSI aims at framing e-commerce. In what way are Digital Sequence Information concerned by this initiative ?

Chee Yoke Ling  : This and other JSIs are illegal as they do not have a mandate based on WTO members’ consensus to start such negotiations. However, they have been moving ahead with many meetings even during the COVID-19 pandemic. The latest consolidated e-commerce text as of December 2020 that was leaked is available online [3].

We are concerned about a new form of biopiracy : the transfer of DSI of biological resources (including human genetic resources) from a country or among different countries without the consent of the country of origin or source, and then intellectual property claims are made by the foreign researchers and corporations that create corporate monopolies.

Let us take the example of microorganisms in the health sector. Pathogen samples are first characterized and sequenced in country A, and the DSI is with international research networks for public health purposes, meaning they are used to confirm diagnoses, to monitor genetic variations, and in other non-commercial research applications. There is little objection, if any, to the sharing and flow of DSI around the world for such purposes.

However, this DSI (and often the pathogen samples, too) is shared among public health laboratories, and are subsequently used for commercial, for-profit purposes. Viruses and their genetic sequences are used by companies to develop proprietary commercial products – vaccines, medicines and diagnostics. These products are typically patented and sold back to the rest of the world on a for-profit basis. Often an extremely for- profit basis, as developing-country public health systems have learned again and again as they confront unaffordable pricing of medicines to treat diseases like AIDS, hepatitis and, most recently, COVID-19.

In this connection, there are 2 worrisome proposals in the WTO e-commerce negotiation text. First is the ban on regulation of cross-border data flows which means that governments have to allow DSI and other data from being taken out of the country with no restrictions including the obligation to share the benefits from the use of the data with the country of origin or source. In addition to data privacy laws in a country there are some other exceptions in the e-commerce negotiation text, but these are insufficient, difficult to use or even “self-cancelling” (i.e. the wording of the exception creates a situation where cross-border data flow cannot be regulated). Secondly there is also a proposed ban on “data localisation” meaning that the tech companies or anyone taking data from a country cannot be required to leave a copy in the country. Although the biological resource remains in the country, the sequencing may not be done locally so having a copy of DSI is important.

Considering negotiations are ongoing in CBD, WIPO, UNCLOS, WHO and FAO over DSI status and regulation, what would be the impact on those negotiations if, on its side, WTO was reaching a decision stating no rules can be adopted by WTO members to prohibit, restrict or prevent "the cross-border transfer of information" ?

CYL  : The main contradiction is with the Convention on Biological Diversity (CBD) and its sectoral application treaties (ITPGRFA, maritime resources...). This is the central international legal framework that recognizes the sovereignty of the State over biological resources in its territory, and also the relevant rights of indigenous peoples and local communities (IPLC). Access to biodiversity has to be with prior informed consent of the relevant state authorities and IPLC, and be accompanied by arrangements for fair and equitable sharing of the benefits from the biodiversity use. This legal system is to rectify the imbalances and injustice from centuries of biopiracy of the resources of the South and its indigenous peoples. The CBD’s Nagoya Protocol is a sub-agreement specifically directed to the subject of “access and benefit sharing” (ABS) and includes pathogens.

The CBD principles and objectives have been applied in the WHO for a small set of pathogens in the Pandemic Influenza Preparedness (PIP) Framework adopted by the World Health Assembly in 2011. PIP has proven to work effectively for reliable sharing of potentially pandemic influenza viruses and, among other benefits, has generated hundreds of millions of dollars of benefit-sharing payments from vaccine and other companies. These payments have been used to support developing-country public health laboratories and to prepare future influenza pandemic response.

COVID-19 has reaffirmed the crucial importance of DSI – it was the sharing of such information in international research network that led to the development of diagnostics and vaccines. Pathogen samples are also being shared. The Nagoya Protocol itself provides for expedited access for public health needs. All this shows that for public health emergencies and pandemics, countries do not hold back access and in fact do not even assert prior benefit sharing commitments from the users. However the users then lock up the resulting products in IPRs and charge as they like.

If the WTO e-commerce rule on cross-border data flow gets adopted, it will undermine and even by-pass the right of a country to ensure that benefit sharing can be realized as a condition to grant access. At the domestic level, a country would be surrendering its right to regulate access and to ensure that there is fair and equitable benefit sharing from the use of DSI that is derived from its biodiversity. This means the country concerned would end up paying high prices for medicines, vaccines, diagnostics, plant and food products, etc. And as is happening with COVID-19 vaccines, the monopolies of patents and other IPRs means global shortages that cost lives too, and we can expect that the same will happen with medicines needed to treat COVID-19.

If participating countries insist on going ahead, they can exclude DSI from the rule but this will face strong opposition from industry and even the Northern governments. So it is important that we have a global campaign against the proposed rule to prohibit regulation of data flow, and to expose the weaknesses and insufficiencies of the “exceptions” that are in the current e-commerce negotiation text.

Can it be imagined that countries owning most of the biodiversity could step out of those negotiations, stating that they do not need to have international rules as they have (already for some of them) domestic rules to which companies must comply ?

CYL  : Since the e-commerce negotiations are “plurilateral” the countries that object to the JSI are not participating in the negotiations and will not be bound by the outcome. For the countries of the South that are participating there are expectations that these rules will help them to enter the digital economy world and at the moment there is not enough awareness yet of the implications for DSI and their CBD/Nagoya Protocol commitments and rights, including their domestic laws. This is because the WTO negotiators are from trade or commerce ministries and the other treaties are under different ministries. So we need to raise awareness among policy makers, negotiators, IPLC and the public generally to the serious implications of such e-commerce rules.

This JSI is coordinated by Japan, Australia and Singapore. It is supported by other countries among which Australia, the US, Japan, the European Union [4], Canada, Norway, Switzerland, the United Kingdom... Opponents to the JSI are mainly India and South Africa with other countries. Those two blocks of countries are quite the same as the ones opposed in CBD over the question of DSI being or not genetic resources and in WIPO over the question of geographic origin of the material used in a patent. Do you consider those two blocks represents in the end the opposite positions in the ongoing and future discussions over a possible massive appropriation of the living ? If so, how do you see it evolving in the coming years ?

CYL  : Corporate forces (and the part of the scientific community that is linked to them) that oppose CBD/ABS and the inclusion of DSI in that system are using the pandemic to paint the CBD and Nagoya Protocol as obstacles to public health/pandemic response. So they are pushing for new rules in the WHO to make sharing of pathogens and DSI mandatory [5], leaving behind benefit sharing while asserting private ownership over the products from the biodiversity/DSI use.

But the negative impact of IPRs shown by the COVID-19 vaccine shortages, vaccine “nationalism” and deeply inequitable access to vaccines for the low income countries (and even middle income countries) has shaken the world so civil society activists can step up efforts to push back on appropriation of nature through the use of IPRs. We need to show that proper implementation of the CBD provides all of us with a fair and equitable system, especially for the South and in particular IPLC who have suffered historical and continuing injustices over the use of our biodiversity.

To reach that objective we must also not allow the WTO to be the forum to establish more rules that deepen the exploitation and injustice, handing even more rights and power to the tech, pharmaceutical and biotechnology giants. The same rules are also often pushed through bilateral and regional trade agreements or economic partnerships so we must make sure our advocacy covers those processes.

*Interview by Eric Meunier. Yoke Ling is an international lawyer who has been working for NGOs for years on issues like biodiversity/traditional knowledge and intellectual property rights, multilateral environmental agreements and trade agreements, climate change... She’s following those issues where these are discussed internationally in the United-Nations bodies, the World Trade Organisation, the World Intellectual Property Organisation. She is currently Executive Director of TWN, a non-profit international policy research and advocacy organisation involved in sustainable development issues, the South and North-South relations.

[5] For more details about these negociations at the WHO, see Inf'OGM, « What legislation for the digitilization of life and benefit sharing ?  », Frédéric PRAT, 7 janvier 2021