Biotechnologies : the power of words

Words, by guiding our thoughts, guide our actions. In the field of biotechnology, it is essential to be aware of unstated intentions. Other peoples’ language, whether accepted or used without a critical eye, may force our consent. Somewhere between self-confirming statements (tautology), false logic (sophism) and authoritative arguments (rhetoric) the following cases of discursive strategy will allow you to judge when propaganda is actually being rebaptized « communication ». 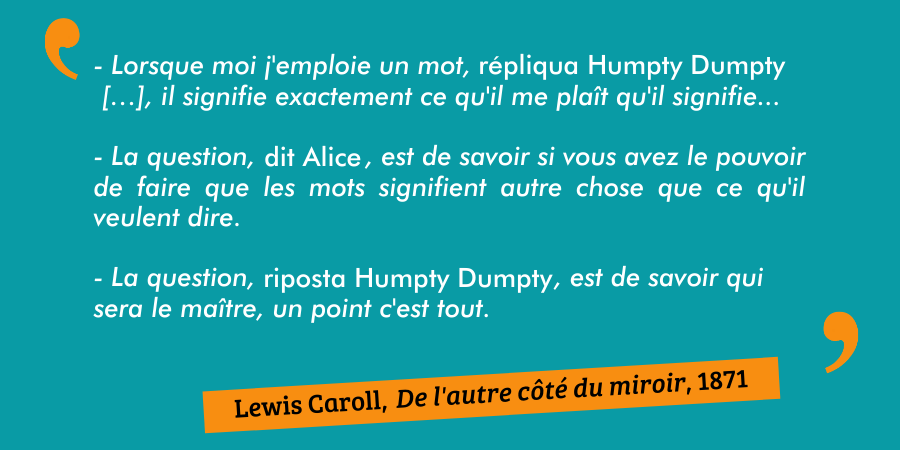 The 2015 INRA Genius programme published an article "Targeted gene modification : the post-GMO era ?" [1]. What was the intention behind these words ? "Targeted" modification is a qualification to make the reader think that such a technique achieves only the desired modification. The use of this adjective leads us to believe that such a modification is precise and reliable, and therefore without collateral effects, well-known as they may be [2]. In this way, the technical stages which produce unintended mutations and epimutations are masked. This is a classical case of false logic : what is not mentioned does not exist [3]. It is also understood that only minor effects are produced, which is a case of minimization [4]. Then we have the cleverly misleading interrogation, "post-GMO era ?", a suggestion which requires no response but leads the reader to believe that the product of "targeted" modification is not actually a GMO, (despite being legally defined as such since 1990). The implicit message makes us believe that these GMOs result from transgenic techniques alone. The terminal (and discreet) question mark, whether precaution or ethical garantee, disappeared from the title a year later, after validation of the initial discursive strategy.

In order to have GMOs accepted by society in general, health is a domain that has been widely exploited as a means of hidden persuasion [5]. A false dilemma such as "It’s nuclear power or going back to the candle" is also often used. Faced with "numerous challenges", intensive agriculture has waved the same red flags since the first GMOs and despite evidence to the contrary : "GMOs or worldwide famine", "GMOs or global warming", "GMO vaccination or epidemics". These illustrate forced choices between two apparently incompatible options when alternatives exist.

How to disguise the new GMOs

Since their definition by the European Commission in 2010, these "new breeding techniques" have grouped together a set of widely differing techniques [6]. In fact, the wording "new breeding techniques" [7] involving the selection of individuals is fallacious because selection operates a postiori whereas these techniques in fact operate a priori. As with transgenesis, and relative to plant mutation for example, the category they belong to is not one of selection, but rather one of production, as sorting is carried out later according to certain criteria. By inscribing them in the continuity of the time-honored practice of selection, those promoting GMOs are in fact avoiding the mention of genetic and epigenetic manipulation. However, this persuasive rhetoric lacks coherence since these techniques are, at one and the same time, being presented to decision-makers as disruptive innovations [8].

Since the 2018 ruling by the Court of Justice of the European Union stating that the new GMOs must not be excluded from current GMO legislation [9], the European Commission and biotechnology firms have been trying to divert attention towards new breeding techniques and then to "genome editing" or "gene editing" But changing a text means more than editing, which should mean correcting certain "letters" [10], that is, DNA nucleotides. It is not "innocent" to refer to writing techniques in a world dominated by word processing just as, with the idea of "retouching" [11], mutagenesis seems both simple and well-controlled. On one hand, the notion of correction implies that it is a question of rectifying a small mistake rather than the intentional modification of a gene with quite another interest at stake. On the other hand, it is a case of shelving complexity. We still have trouble correlating genotype with phenotype, as genome regulation and the production of new molecules (due to a simple shift of the reading frame) have not been and still are not duly studied. In this way, "retouching" is a misnomer capable of inducing hundreds of unexpected genetic and epigenetic effects. This misleading idea of precision is used by the communicators and is supposed to explain away such events in a reassuring way so that these techniques should be accepted [12]. It is to be noted in the case of Crispr, which necessitates prior transgenic manipulation, that there is no mention of this. Reading between the lines, it would seem that the aim is to replace legally defined GMOs by undefined EGOs, where "E" stands for "edited".

In order to legitimatise their (epi)genetic modifications, companies, while hiding the evolutionary problems brought up by their new sophism are putting forward an argument to which people are currently sensitive : plants obtained from these new techniques could appear naturally (See argument, page 11). This argument explains why these companies are wanting politicians to focus on the end-product alone, while remaining ignorant of the process for its obtention. According to the concept that "what you don’t name doesn’t exist", it has become a question of removing the mention of in vitro cell multiplication, capable of generating genetic and epigenetic modifications. The industry is in fact hiding any techniques which do not support the concept that "Nature can do it."

GMO manufacturers insist on the fact that their products would be equivalent to those resulting from the process of evolution. However, in order to demonstrate this equivalence, the context in which the comparison has been made must necessarily be determined. It so happens that the "experts" base their equivalence modelization on the molecular data of the transformed gene alone, as does the HCB scientific committee in a recent opinion published in mid-July 2020 [13]. Unintended effects are not taken into account. This denial of complexity would seem sufficient to reject the term "equivalence" when taken out of context, just as the word "similar" is used to imply "identical". Such amalgamation would lead to considering that wine, being 80% water, is the equivalent of water ! Thus, a lecturer at Agro Paris Tech (Institute of Technology for Life, Food and Environmental Sciences) has been able to state that "Yes, GMOs really are natural" [14] as it would seem that since gene transfer exists in Nature and that transgenesis is gene transfer, it follows that transgenic manipulation is naturel. QED ! The two premisses are valid of course, but the conclusion is false owing to the fact that human manipulation, being a regulation process, is involved in transgenesis.

The science of biotechs

In 2016, the Inra, Infremer, Cirad ethical committee [15] wrote that "acculturation is the main stake in Life science disciplines and also brings associated ethical questions to the forefront, so that these new technologies and the innovations issuing from them should be considered a progress in society". Quite clear. The principle underlying this appraisal is that innovations, if technically possible, are to be implemented. The ethical question thus becomes a framework a postiori. Two questions are thus posed, one about the responsibility on the part of the scientists relative to the inherent risks [16], the other on the part of democracy relative to the ethical question : can it refuse certain innovations ?

The most important question is to which Science - the basis of these innovations – are we referring ? Hidden under the usurped term, "Science", there are hundreds of ambiguities and stylistic devices. What GMO producers call "science" usually refers to the molecular doxa of the 1970’s, which claims that by tampering with genes or their expression we will obtain new characters. The only aim of such a mechanistic view of life - so amazing in our times of genetic regulatory networks, the circulation of genetic information between cells and the epigenetic adaptation of organisms to their environment - is to close the debate. Recurrent correlation difficulties between phenotype and genotype also prove that life can be reduced neither to its DNA nor even to an information flow. In a time when digital models are taking over from real life [17] and economic considerations are overriding precaution it is important to bring to mind the limits of our knowledge. The vision put forward by the companies also puts aside the temporality of life : laboratory time is not evolutionary time nor even the time in the field. Biotechnology lags behind biology in general but tries to prove the opposite by focussing attention on the traits considered to be of interest. A critical mind will be aware of the omnipresence of rhetorical arguments upholding this self-proclaimed "scientific expertise". A certain use of authoritative argumentation and false persuasion in the domain of biotechnology is not destined to awaken our critical mind, but rather to make us consent to an artificial world from which only a few can benefit.

Yes indeed, using the power of words means being the master.

[3] Sophism : a general term for a false argument which appears true but is intended to deceive.

[16] An historical analysis would be necessary