The French law on GMOs : “balanced” or biased ?

version PDF
par Inf’OGM
ARTICLE TRADUIT : français
Remarks made before the French National Assembly on 20 May 2008, by par Jean-Louis Borloo, Minister of the Environment : « Ladies and Gentlemen, before this bill, there was absence of law and order : everyone could do what they wanted and where they wanted, whatever the possible harm for third parties. Now that we have a balan- ced document and, what’s more, that there are no more GMOs sold in France, we have a clear framework ».

In December of 2007, the Government presented a bill on GMOs in the Council of Ministers. Agricultural and citizen groups were already critical of the text’s lack of accordance with the consensus reached at the Grenelle Round Table. Six months later, after having been sent back and forth between the French National Assembly and Senate, the text has been modified and the results are mixed : some improvements have been adopted, but the sub- stance of the text remains unchanged. Whilst establishing the right to produce “with or without GMOs”, the text implements three noteworthy changes : the creation of a new organ of GMO evaluation in France, the required adoption of “rules of coexistence” and the creation of a special responsibility regime in case of crop contamination by GMOs. The law went into effect on 26 June 2008, and Inf’OGM explains the stakes of this law, its contents, and its consequences in the years to come. 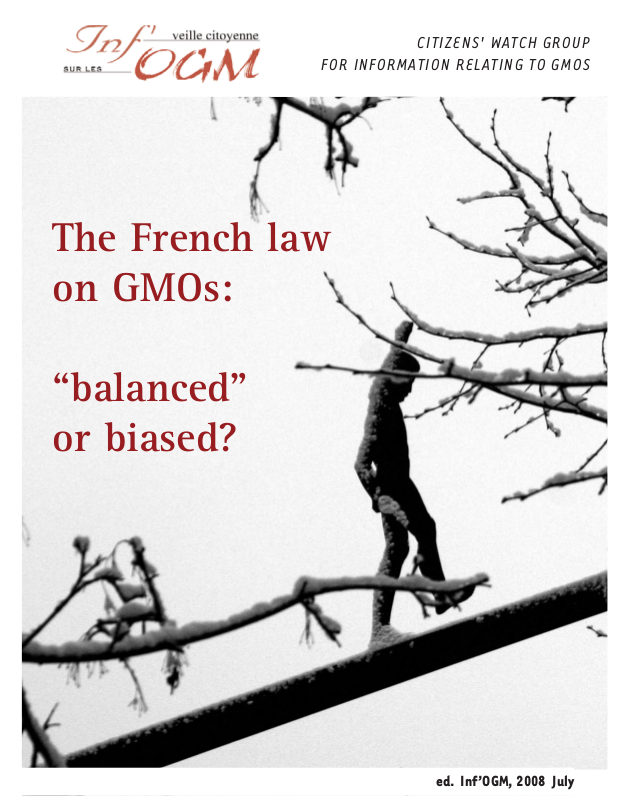 TABLE OF CONTENTS I. The genesis of the law

Incorporating the directive on GMOs ?

The Grenelle reaffirms the need for law

II. The outlines of the law

With or without GMOs ?

Rules of coexistence yet to be defined

Transparency and participation : between progress and status quo